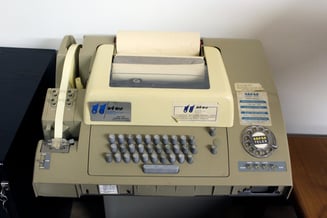 I started my journey with EDI (electronic data interchange) 27 years ago working on Telex machines, yes the things of ticker tape parades. My assignment, through a relation with Western Union, was to connect pre-internet, pre-eMail, and even pre-FAX computers, still relatively uncommon compared to today, to the Telex network.  The end game was to allow companies to send domestic and international registered messages easily, without using the cumbersome, slow and heavy ticker tape driven iron Telex machines.

Think a manual typewriter on steroids.  For those of you who remember modems (300 Baud was the slowest average, 1200 Baud was fast, 56K was lightning fast), Telex machines ran at a 50 Baud snail's pace.

Because of my "expertise" in communications I started to get calls in the late ‘80s to help get clunky, complex Bisync (Bisycronous) modems implemented for various companies. Bisync modems were an IBM breed necessary to communicate with the mainframes of the day - not dissimilar to dialing into AOL for internet access a few years later.  Most of us will never forget that still familiar, "You've Got Mail!"

Anyway it seems there was a new big guy in town (in the business world) running the show called Walmart.  Walmart ran on mainframes with banks of modems.  You can picture them just like the image of a Google or AT&T data center today, to inexpensively connect in suppliers to keep prices low - their hallmark.  Walmart, certainly an EDI trendsetter, employed EDI originally developed for the military logistics of the 1948 Berlin Airlift (see this blog for more on this) and later the auto industry where large amounts of data had to be passed via the mollasses modems of the day.  EDI can code and pass a large amount of information in a very small message size, but that’s a story for another day.

So Walmart really drove the expansion of EDI in the retail industry starting with just EDI 850 POs, EDI 810 Invoices and the dreaded "transaction set from hell," the EDI 856 ASN (advance shipping notice). Side note: the EDI 837 Health Care Claims documents of today easily take the cake for complexity.

EDI today has thrived with perhaps over a hundred transaction sets and has now expanded into XML and Web Service transactions where systems talk to each other automatically.  Modern EDI tools can transform data from any-to-any (format that is) and makes the job of data integration specialists that much easier and FUN if you're techy geeks like us.

But thinking about how far the industry has come kinda makes you want to just sit back with a cup of coffee (or wine?) and remember the old days.

Roger is the President and CEO of Sitcur.