With all the emphasis nowadays on Social Media and Apps and devices that can talk to us in human words, I was thinking back to the early days of the Internet when we needed a modem to send e-mails and files.  Modems were used to translate the digital signals from computers to analog signals that could be transmitted over telephone wires to another computer where another modem translated the signals back to digital.  (Did you know that modem is an acronym for modulate-demodulate?  Good cocktail party trivia!)   Things are a bit different now that data is transmitted over digital data lines that obviate the need for modems. 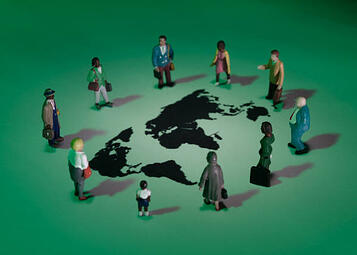 The emergence of Social Media has caused computer engineers to design software and Apps to be able to deal with us, the “Human Analog Interface.”  We expect computers, for example the Social Media interface, to be able to “talk” to us or at least allow us to communicate in human language terms.   Social Media is all about relationships, not crunching vast amounts of data.  It has opened up new methods of communication and caused new words to emerge into our daily conversations.  “Tweet” is now recognized as a noun and “Google” and “IM” are now commonly used verbs.  We are even developing new forms of written language to be used with these tools.  This "social media language" with abbreviated words being communicated via Twitter and Instant Messaging is recognizable by all who use those tools on a regular basis.  These new words are creeping into our daily conversations and e-mails as well.  Even if you are not a user of the tools, you know what a BFF is!  I saw a video clip of a contest between two Morse code operators (older gentlemen) and two younger men (teenagers) using IM.  The contest was over who could communicate a message faster.  The Morse code operators won, proving Morse code is the faster tool.  However, the abbreviated language used to tweet and IM is much easier for people to learn than Morse code, making it very popular with those utilizing that method of communication.

We are at last arriving into that Star Trek world (I am a Star Trek: The Next Generation fan) where we can communicate to our computers with the spoken word.  Now, I just have to find one that will get me my morning Earl Grey tea, hot!