Part 1: The What, Why and How of JSON for EDI Integration Specialists

With the latest release of Liaison Delta 6.1, this nifty data translator now supports JSON. And of course, that raises a whole slew of scary questions for our EDI mapping experts:

I want to start this blog with three affirmations:

In the established world of larger mid-market to enterprise-sized business, EDI is well entrenched and is not going away. Brian Bailey recently blogged about a survey done on behalf of IBM related to their EDI business. Bailey states, “Looking at 2013 research, 46% of the companies surveyed use EDI ‘heavily’ with an additional 31% reporting ‘some: EDI usage.’ With the investment and expertise these companies have developed over time, it is highly unlikely that EDI will disappear anytime soon.”

XML is widely used in the Web-interconnected world. In his analysis of JSON Use Cases, blogger “drrwebber” says, relating to his blog post, “[The] number one thing to notice here is you are reading this document and it is being delivered and rendered to your computer screen using XML, RSS and xhtml and not JSON. Back in the day when XML was brand new, Bill Gates held a press conference to announce that Microsoft would be adopting XML wholesale for use across its products and Windows operating system. This tells us that XML is ubiquitous and extensible (that is in its name). There is now a huge number of XML based standards in a family of solutions that support all aspects of the needs of information exchange. In today’s challenging world you cannot just discount those as unnecessary.”

(3) JSON may replace XML in some cases – not EDI

Back in 2002, Dirk Vanderbist wrote a research paper comparing the histories, usage, strengths, weaknesses, and comparative advantages between EDI and XML. Fear and confusion reigned in the B2B market as to the future direction of data flows. The question was, “Will the [then] future of B2B messaging format be predominantly handled by traditional ANSI X12/EDIFACT EDI or by XML?” Time settled the questions, and what emerged was a rich ecosystem where EDI served its purpose while XML prospered in its space.

Today, there is a bit of a data format revolution that continues. Compared with XML, JSON holds the promise of a smaller file size footprint, easier human readability, and easy extensibility through existing and emerging tools. The smaller footprint of JSON is a key consideration for technologists as they consider how to collect, manage, and interpret big data, and for ongoing database storage of information.

While there is a new evolution in data formats like JSON becoming firmly entrenched, there are still drawbacks to JSON in its current state. A couple of these limitations are mentioned by Andrew Binstock in his blog titled, “After XML, JSON: Then What?” Binstock specifically mentions, “JSON’s non support for a date data type and that JSON doesn’t support comments. These shortcomings have already led to variants, such as BSON, the binary JSON format devised by 10gen and used in their MongoDB NoSQL database.”

This video snippet from Lynda.com provides a nice overview of the JSON format.

And here is a quick visual of the difference between the same data rendered as JSON and as XML. 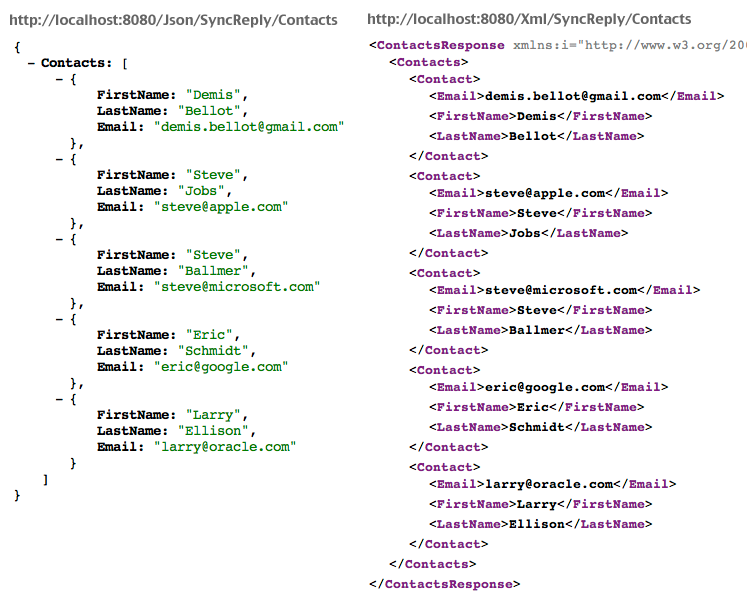 Hopefully this post has introduced you to the concepts and purposes behind JSON. On Wednedsay, July 31, I will send out a follow up post that gives you a couple of live use cases where EDI, XML, and JSON can live happily together in a broader world of data integration.