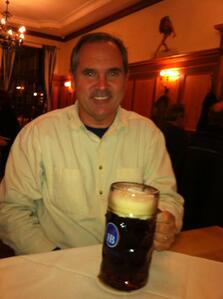 Next up on our biography series is David Aird, one of Aurora's spectacular Tech Support Specialists.  As a long time employee, David has been through many changes as the company has evolved.  One thing that has never changed though is how much our clients rely on him and insist that ONLY David can help them.  It's tough to be that popular!

David took an interesting journey to find his way into the EDI industry.  The story begins in Texas, where he was happily running a successful pawnshop.  His wife Sandy however, had a desire to move out of Texas.  She had suggested several places that interested her, but David did not share the same interest in relocating.  It wasn’t until they spent a week in Reno, that he found himself saying that he could see himself living in Reno.  Reno will do that to you.  It's really not the small gambling town people assume.  It's a lovely community with a thriving art scene, great restaurants, beautiful weather and outdoor activities abound.  They came back the following year to ski again and to gauge the employment opportunities in the pawnshop field.  He found himself with several job offers and they made the move to Reno that following summer.

After the arrival of their two children (Amanda and Jack), David was finding it difficult to put in the long hours required at the pawnshop.  Realizing that he needed to be home more with his family, he decided to start down a new career path.  He answered an ad for EDI Support, Inc. (ESI), which was the previous name before Aurora Technologies and ESI merged in 2010, and decided to make the jump into a new job and a new career.  Even though this was a new field for David, he found the work interesting and challenging.  Learning to spell EDI is no easy feat as I remember what a huge help to me he was when I was learning to spell it!

When David isn’t working, he enjoys spending time with his busy family.  He also enjoys starting projects of all kinds.  Like many of us, he doesn’t always finish all of the projects he starts.  Just ask Sandy about that.  Currently, he is working on improving his golf game and he is also trying to find time to re-ignite his passion for home brewing.

Click below for a free whitepaper on what getting data integration right can do for your business.