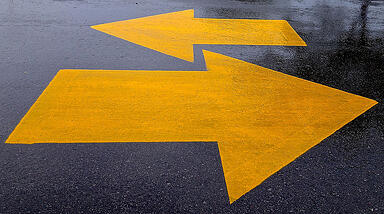 In this way, cloud storage was born.

We have known The Cloud by different names.  When I was first in the industry, we called it Time Sharing.  More recently we have used the term, Hosted.  Regardless, The Cloud is pretty much a euphemism for Somebody Else’s Computer.

The purpose of this blog is to help you decide if EDI in the cloud is the best choice for your operation, or is there some other configuration that will serve you better.

Let’s begin by looking at the various configurations:

Let’s look at three key aspects of each, to determine which model is best for us, or our clients.

The cost of acquisition of the hardware and software to support in in-house EDI system can vary widely, from a few thousand dollars, to hundreds of thousands, depending on the decisions you make.  Cost is not always a predictor of success, in this case.  And big names don’t always perform best.  When calculating the cost, make sure you include the cost of the database software, networking, the hardware platform, and ongoing support in addition to the initial and continuing cost of the EDI software.  Also, make sure you understand what the initial cost includes, in terms of licenses, scalability, etc., and what expansion might cost you in the future.

For a hosted solution, there should be virtually no acquisition costs.  But expect to pay consultant’s rates for map development.

For Web-based EDI, you will probably not directly interface your application with the EDI system.  Instead, you will re-key all inbound and outbound data into the application, or the Web EDI system.  You may be charged for each data transaction, and for map development for each trading partner.

To implement and effectively utilize your EDI system, someone will have to configure it and create and maintain the mapping and business processes that are required in every EDI system.  For an in-house system, you will need to either hire somebody, or contract with an expert to take care of these tasks. You will also want on-going support on staff, or quickly available.  For a hosted system, or a Web-based system, the host should provide expert help with mapping, and configuration, plus support at a contracted rate.  The hosted cloud solution undoubtedly has staff skilled in many areas, but they may also be engaged helping other clients.

When selecting between the hosted or in-house solution, volume should be considered in terms of the capacity of each site to process the peak number of transactions in a timely manner.  Does the hosted solution have the throughput and storage capacity to handle your traffic level, as well as all the other customers the host services?  Does your own operation wish to invest the money to put together a big enough system to handle your volume?  On the other end of the spectrum, how many transactions do you handle in a day?  A week?  A month?  Are there few enough that the savings of using a web-based service will outweigh the cost of implementing a fully integrated EDI solution?

Og’s solution won’t work for everybody.  And today’s cloud has many features that Kow could never supply.  Carefully consider these, as well as other questions before committing to purchase EDI software, trust your data to somebody else, or step back from a full system for the advantage of the lower entry cost of Web EDI.

Art Douglas has been an independent consultant since 1983, and has been implementing EDI solutions around the world for over 15 years.

Click below to read a case study on how we helped a company with no prior EDI experience become EDI compliant with a complete, integrated on-premise EDI solution.