Customer Service is the New Black 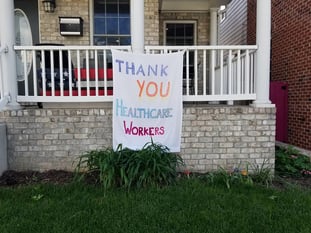 Photo credit: Eli Christman.  Long before the crisis the world finds itself in now, the hospitality industry and really most service industries in general, seemed to have forgotten that the term “customer service” actually means “to serve the needs of the customer."  Service providers and customers alike had forgotten that we’re all human, and thus everyone became a mere number.

I loathe this crisis we’re in and would wish it away if I could.  I’m deeply saddened by the loss of thousands of lives and can’t imagine the depth of the impact those losses have had on their families.  I’m distressed every day by the millions of people that have been adversely affected by this pandemic.

But then I hear the stories of thousands of healthcare workers not only persevering though these times, but doing so with endless compassion for the patients they’re serving.  I’m further joyed to see repeated stories of the generosity and appreciation from so many communities around the globe toward those same healthcare and frontline workers.  From the homemaker sewing masks and giving them to first-responders to the pet groomer offering free services to the pets of the elderly, I see goodwill and kindness all around.  What's more, companies like Tory Burch are leading by example by offering $5,000 grants to small businesses.

It’s these uplifting stories of giving without being asked, generosity and appreciation that give me a sense of renewed faith that humanity can recapture, well, being human.  We’re forced to wear masks, but people’s eyes are smiling.  We’ve stopped complaining that one-day delivery now takes two-weeks.  We’re appreciating all the things and people we have.  We’re treating one another with respect, and by doing so, it’s self-respect we get back.

Humanity will eventually win against this virus, and then we’ll be left to deal with one another again.  I’m confident the lessons learned will make us all more patient with one another and mindful that those that provide services don’t set about that task to do it poorly.  Good customer service will become commonplace, not only because service providers will more deeply appreciate having customers, but because customers will also more deeply appreciate their service providers.

GraceBlood has been people serving people for two decades, within the organization and out in the world, and expects to continue feeling appreciated well into the future.

Brian is the Managing Partner for GraceBlood LLC.