RFID in NFL Football – What Does this Have to Do with EDI? 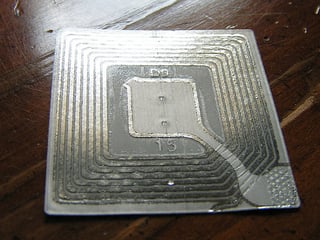 Photo appears courtesy of Jonathan Holmes.  RFID (radio frequency ID), a cousin to the EDI 856 ASN document, which is used to track shipment cartons along the supply chain all the way to the distribution center has a new, wider adoption in NFL football. What?!  With the Super Bowl and entertaining (and expensive) media spots behind us for this year, what does EDI and RFID have to do with football?

Well in the first place the major NFL teams have adopted EDI as part of their supply chain, humming to keep those refreshment stands (think beer) and souvenir shops replenished, and RFID is widely used to track the cartons.

But now there’s a new “play,” err I mean twist, with a Zebra Technologies (bar code printers and scanners) system called MotionWorks currently in 18 stadiums.  MotionWorks allows the entire stadium to be wired with fiber optics and RFID receivers, while bottle cap sized RFID Bluetooth chips are inserted into the shoulder pads of the players, you read it right and you read it here!!!

The technology allows fans and the NFL both to track the exact position, movement and biometrics of each player on the field. Wow!!! Our mundane supply chain logistics technology of orders, invoices and shipments has really gone High Tech.  It is possible to see when a quarterback torques his body to throw and to count the number of throws.

In the future this data will allow players to train in simulators the way pilots do now, not to mention allow coaches to study previous games and learn from mistakes made on the field.  EDI and RFID technology, ready for the new playbook…

Roger is the President and CEO of Sitcur.