The Smart Money on EDI 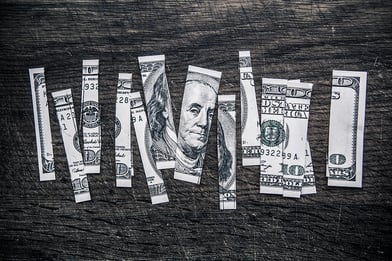 Picture appears courtesy of Tax Credits.  This week's blog article was written by Art Douglas.  "EDI can save your company 99% of the costs of receiving Purchase Orders and forwarding Shipment Notices and Invoices."  That’s the claim made by the author of an article who knows about measuring that kind of thing.  I would add that in my many years in the EDI industry, I have seen many implementations that squander any possible gains by failing to find out the facts before deciding how to implement EDI.

I was notified at noon the day the final demo was seen, and the final proposal was received, that my services were no longer required. I was dismissed.  Their management would make the decision, unencumbered by any insight I might provide.

My contacts later informed me that the healthplan’s IT management had selected the most expensive solution.

The client had lost two years and $300,000 plus staff time and consulting costs on a solution I did not recommend, a solution that was ill-suited to their integration and EDI needs.

Later, I was hired to install an EDI solution for a medical products company which up until then had had no EDI capability.  As soon as I arrived on site, the IT manager called a meeting and began telling me how the solution would be implemented.  For example, he would require any trading partner to use FTP point-to-point with the client, no VAN would be allowed (too expensive), and no alternative communication protocol would be considered (must keep it simple).  The first year, only a single trading partner would be implemented.  I was tasked with training a programmer to “Run the EDI.”  The programmer was pointedly indifferent to the assignment, wishing to continue in his primary role as Developer.

Both these implementations failed – one initially, the second ultimately, because management refused to listen to the experts.

EDI is not an expensive undertaking, compared to implementing a full ERP system.  Return on Investment typically begins soon after the software is purchased.  But a successful EDI installation requires understanding of the industry, and understanding of the tool set.  There are an infinite number of ways to squander all the gain a company could potentially realize by stepping into pitfalls that are easily avoided just by listening to experts who have succeeded in the past.

A start-up company recently contacted me to consider being their EDI expert.  They had decided to convert from an in-house EDI solution that was integrated with their ERP to a hosted solution proposed by a leading provider in the EDI industry.  Management had decided.  They had no staff expertise in the area of EDI.  I fear for this company.  They are struggling to get distribution for their narrow market product line.  But any wholesaler or large retail chain would be forced to pay dearly for the right to establish an EDI relationship through the hosted solution.  If only they had asked an expert, rather than relying on the word of a slick marketing team and the decision of an executive who has never worked with EDI.

If your company is thinking about adding EDI capability, or modernizing your existing capabilities, do the smart thing, call an expert.  Heck, contact me.  Art Douglas.  You can find me on LinkedIn.  Or call my friends at the Aurora EDI Alliance.  Spending a little money now could save you a bundle down the road.  Really.

Click below for a great whitepaper on what well designed data integration can do for your business.