'Twas the Night Before Christmas: An EDI Fairytale 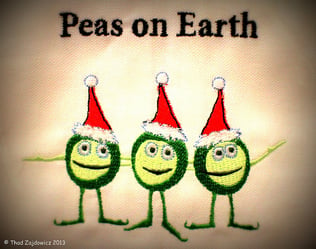 Photo appears courtesy of Thad Zajdowicz.  This week, for a little #flashbackfriday, we are reprinting our fun takeoff on 'Twas the Night Before Christmas.  Just a little holiday humor...with sincere apologies to the original author, Clement Clarke Moore.

'Twas the night before Christmas and all through the store not a PO was issued, and 860s no more.

RFID tags hung by receiving dock with care, in hopes that the trucks soon would be there.

The clerks were all nestled at registers and stations, while visions of UPC codes danced across nations.

With the EDI manager and I in our caps, we had just settled down for 852 recaps.

When inside the server room there arose such a clatter, we ran from the cubicle to see what was the matter.

And away to that freezing room I flew like a flash, right through the door and PVC curtains in a dash.

The CFL bulb on the copy paper supply gave the lustre of mid-day to equipment I spied.

When what to my wandering eyes should appear, but a miniature sleigh and eight tiny reindeer.

With a little old driver so lively and merry, I knew in a moment it must be the X12 fairy.

More rapid than EDI his courses they came, and he whistled and shouted and called them by name.

"Now Dasher, now Dancer, now Prancer and Vixen!  On Comet, on Cupid, on Donner and Blitzen!

His eyes how they twinkled, his dimples how merry!  His cheeks were like roses, his nose like a cherry!

His droll little mouth was drawn up tight like a bow.  His beard was as white as the copy paper below.

He spoke not a word but went straight to his work, and fixed the EDI errors without a smirk.

He then laid his finger on the side of his nose, and giving a nod, up the cooling system he rose.

But I heard him exclaim, 'ere he drove out of sight, "Happy holidays from EDI Alliance and to all a good night!"

The EDI Alliance wishes you and yours a wonderful holiday and happy new year.